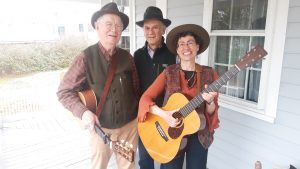 Michael and Carrie Kline recently returned to the Valley after decades as West Virginia folklorists and musicians. We bring this art, history and cultural background to our musical performances. We now perform with Joe Blumenthal on upright bass. In addition to performances, we offer workshops on West Virginia traditional songs, which we’ve learned eye to eye and knee to knee from the older generations. We also perform coal mining songs as well as a repertoire of music of people and nature. Feel free to explore the soundbytes and other tabs at https://www.folktalk.org/concerts-classes/.

Michael and Carrie Kline perform country harmony duets from coal mining songs to gospel, family songs and front porch music. Listeners may find themselves dancing a waltz to “Fiddler Jones,” the song that celebrates the role of music and old-time fiddlers in our lives and our communities, those who play for family and friends or local dances, or those who play for no one at all.

Carrie and Michael Kline’s lives circle around one another and are inspired by Appalachian music and culture. Their voices carry the songs with truth and authenticity, and their guitar accompaniments and haunting harmonies get you where you live. With their lifelong focus on West Virginia history and tradition, their performances celebrate the old-time singers as well as the songs.

Michael and Carrie perform in Europe and across the United States. As folklorist-musicians they weave songs and stories, evoking the times that really matter, time with family and friends, spiritual times, wrapped in a patchwork quilt of vivid imagery. Kitchen songs. You can smell the biscuits baking.