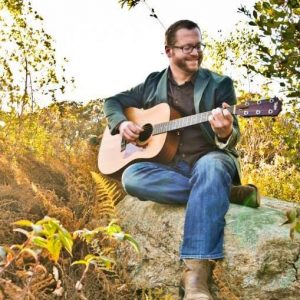 Learn to play the guitar, or break new ground on the instrument! Jared teaches all ages and abilities!
Must have: A guitar
May have: An empty book of tablature, Hal Leonard Book 1 for Guitar

Jared Fiske is a performing musician and private music instructor from Sturbridge, Massachusetts. He has been performing and teaching music professionally for 20+ years.

Hailing from an artistic family, Fiske began performing in musical groups with his father, Rob Adams, and brother Seth at a young age. “It was the best possible way to learn” recalls Fiske. “You really had to sink or swim and get over the stage fright in a hurry.”

Fiske began teaching guitar lessons in high school to his friends, five dollars a lesson. He has continued off and on ever since. “It’s a wonderful resource, having taught for so long to so many different ages, styles and interests. I’ve learned to love equally all the varied approaches – the real key is finding the one the student most enjoys!”

Fiske’s original song “Choice” was used in a short film for the non-profit Planetaid.org. He also co-wrote the song “On a Monday” which received the $5,000 grand prize award at ourstage.com for best song in 2009.

Fiske’s formative groups include “Fiske and Herrera”, who recorded and toured throughout the country from 2006-2011. Currently, Fiske performs in the rock outfit “Dirty Pocket” and also in americana band “The Casters”.

You can catch Jared performing at bars and coffeehouses throughout Massachusetts, 200+ shows a year. When he’s not playing out, Fiske records and produces other artists at his home studio in Palmer, MA.

You can find Fiske’s debut solo LP, “Turning Back the Pages” on Spotify, iTunes and CDbaby.
Jared has 20+ years experience, and is happy to teach notation, tablature, chord charts or by ear. Whatever you prefer!

Must have: A guitar
May have: An empty book of tablature, Hal Leonard Book 1 for Guitar

Learn to play the guitar, or break new ground on the instrument! Jared teaches all ages and abilities!