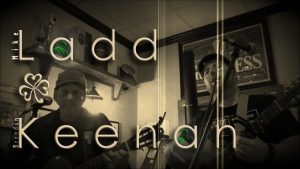 Mike Ladd has been a strong presence in central Massachusetts for more than forty years as a singer, guitarist, songwriter, and performer.  A journeyman of many genres, Mike has fronted the Rock bands Chimera, CCA (Critics, Cynics, Antagonists), and Wistah; Funk/R&B bands The Valves and No We Don’t; as well as his avant-acoustic rock band The Ladd Foundation.  He led the Irish Mod band Blackstone Cúil, performs solo and in various incarnations.  Currently, he performs with the Irish/Celtic group Banda Gan Ainm (A Band Without A Name) and with Ladd & Keenan.

Brendan Keenan is a musician from Worcester, Massachusetts, USA. He has played in many contemporary Irish groups, including Derek Warfield and the Young Wolfe Tones, Fergus, and Blackstone Cúil. A multi-instrumentalist, Brendan plays guitar, mandolin, Irish bouzouki, accordion, and Irish whistles. Growing up surrounded by the Irish musical tradition and with grandparents who emigrated to the United States from Carlingford, County Louth, Brendan gained an early appreciation for Irish music and songs that carry on the folklore and traditions of Ireland.

WORKSHOP13 AND ARTWORKS GALLERY ARE CLOSED TODAY DUE TO THE STORM.