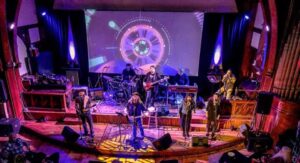 NOTICE: This event has been canceled due to the coronavirus. We look forward to hosting Livio & The Free Spirit Society at a later date.

BACK BY POPULAR DEMAND! The Grand Hall at Workshop13 is proud to present a rock’n evening, filled with dancing to the rock band, The Free Spirit Society!

Livio Gravini has been performing for audiences in New England for many years and is considered a local legend to his devoted fan base. His songwriting style reflects the classic feel for the culture found in this area, rich with blues, and Rock-n-Roll. A seasoned professional, his powerful voice and personality is felt in every performance.

The Free Spirit Society is an original rock band who’s music and feel is rooted in classic American Rock-n-Roll and they are currently working on their 3rd CD! The band was formed in 2015 and shortly after the release of their first CD, they were the winners of the first 2015 Masters of Music awards and headlined on the X-Finity Stage during the Big E! Since the release of their first CD, they’ve built a solid dedicated fan base and have been honored to open for the Artimus Pyle Band, Caleb Johnson, Tom Keifer of Cinderella, and last year they opened for STYX at the Calvin Theater in Northampton, MA!

Hardrock Haven Magazine’s Review: “Livio and his songs are the antidote, the salve, to generic, autotuned disposable pop that crowds the airwaves. This is real rock-n-roll, forged from years of writing, rehearsing, playing live and just plain living.”

Doors open at 7:00pm and the show will start at 7:30pm.
Beer & Wine available for purchase. As always we will be featuring Tree House Brewery!
No drinks, coolers or food allowed on-premises.

We continually strive to bring phenomenal talent to the Grand Hall at Workshop13. We hope you will support not only Workshop13 but also the entertainers and artists who are so excited to perform!
Workshop13 Arts & Cultural Center is a non-profit 501(C)3 located at 13 Church Street, Ware, MA.

The Grand Hall at Workshop13 is proud to present a rock’n evening, filled with dancing to the rock band, The Free Spirit Society!